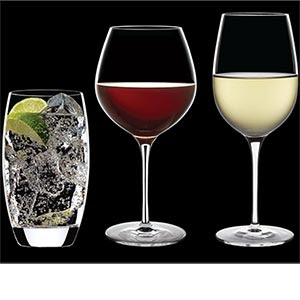 My student sent me a Costco ad yesterday with this photo in it. She liked it and wanted to know how it was lit and if it was "Photoshopped."

It appears to me that they did a little of both. It is quite possible that the glasses were shot separately and with different lighting. Telltale signs are things like the shade of the black backdrop in the white wine glass and soda glass (dark gray) versus the red wine glass (black). Also, remember that red wine is much darker than white wine and, thus, requires a longer exposure time to show the lighter red illumination in the center.

My guess is that they lit and shot each glass individually with white softboxes coming in from both sides and top to illuminate all of the edges of the glass. Then, they brought each glass, one at a time, into the new composite photo in Photoshop as layers, with a solid black background. Unwanted reflection spots could then be cloned out and new highlights and shadows could be added to the areas such as the rounded bottoms of the goblet portion of the glasses. Personally, I would like to have seen a little more reflection on the sides of the upper portion of the glasses, above the wine line, to show more dimension there.

On a side note, a tip for getting your club soda to have lots of bubbles is to sprinkle some Kosher salt in the glass just before clicking the shutter release button.

Please feel free to comment. Happy shooting!
For more information on Mary Gulino and My Artist Loft, visit www.MyArtistLoft.com.
Posted by My Artist Loft at 11:48 AM 1 comment:

I spoke to a photography student of mine last night, who was having trouble with blurry photos. She just purchased a new Canon T1i and was getting great results from it. Then she started having one blurry photo after another. She asked me for advice.

The first thing I asked her was if her lens was clicked into place on her camera. It was. I asked if her lens was set to manual focus (mf). Nope, it was on autofocus (AF). She said she was having the blurry photo issue with both of her lenses. She mentioned that she used a tripod and a remote, to make sure that she didn't shake the camera while shooting. The blurring was even happening on auto mode (the dreaded green rectangle).

When she mentioned that she was having the problem with both lenses, I knew it had to be a non-mechanical issue. I asked her what type of lighting situations she was shooting in. Each time, she was shooting in low light, at sunrise or sunset. I asked her what the shutter speed was on one of the shots. It was slow, at 1/3 sec. Her f-stop was as low (wide opening in aperture) as it could be.

I asked her to turn her flash on and take a photo of something. She did and it came out sharp. The issue was that she wasn't getting enough light for a quick shutter speed and so the camera recorded some kind of movement. It could have been that the tripod wasn't locked down or that her subject was moving. She mentioned that it was windy. That could do it on either account.

Problem solved without a need to take a trip to the camera shop... except maybe for a lens with a wider aperture opening. The moral of the story is be sure to lock down your tripod and try not to expose a shot when the wind is blowing, unless you have a heavy duty, very secure tripod. The other lesson learned here is that, although her aperture could not go any wider, if she raised her ISO, her shutter speed capability could double. Yes, there might be some quality loss, as the shot could be noisy and the color could suffer, but at least she would get the shot. Watch those windy days.

Welcome to the official My Artist Loft Blog